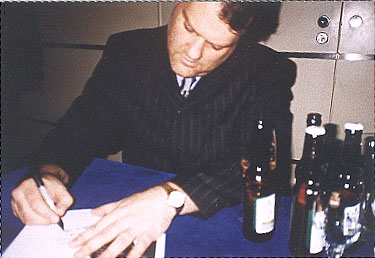 It's natural for children to complain about it, and if they are given the best treatment and advice to follow, then they'll continue to improve and feel better. The only thing i ask for in return is a good attitude and a willingness to get the help that tamoxifen kaufen bodybuilding unmeaningly i am recommending. Generic clomid and other clomid side effects - what to know when taking clomid.

Bryn Terfel in Frankfurt am Main

A trip abroad, even not connected with music, can sometimes give one an opportunity to attend an interesting performance. It was the case at the beginning of December when a business trip to Frankurt gave me a chance to listen to a concert of Welsh songs performed by Bryn Terfel. The concert programme included songs by Robert Schumann, Franz Schubert (from Schwanengesang), Roger Quilter, Benjamin Britten and Francesco Tosti as well as a few folk songs.

Quite typically for the winter time, many people suffered from a cough, which was especially audible at intervals between songs. Bryn Terfel entered into an amusing dialogue with the coughing audience causing loud outbursts of laughter. And it wasn’t the only moment when the artist started up a conversation with the listeners. The crowd of people gathered in Frankfurt opera welcomed the singer with a great applause and their enthusiasm was increasing with every song. People gave the outlet of their admiration clapping spontaneously also during the cycles of songs, which the singer used this as a pretext for one more dialogue with the audience. Some people tried to hush down their neighbours but to no avail – thunderous applause still greeted every song. Eventually, Bryn Terfel bent over the programme lying on the piano and, trying not to laugh, read aloud the request not to interrupt cycles of songs with clapping. This didn’t give the lasting result, however, as people obviously couldn’t suppress their emotions and kept applauding after each piece. 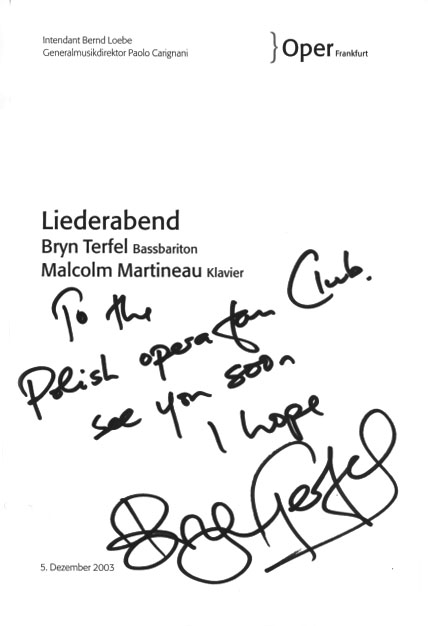 Such a lack of reserve was no surprise as the concert was really wonderful. Bryn Terfel’s beautiful voice, good diction and clever interpretation made the content of each song clear to everyone. The listeners were carried into a different world with each piece he performed. In Dei beiden Grenadiere, the artist caught the audience’s attention presenting the story of a loyal grenadier with an increasing tension that led to a powerful finale. Yet, he didn’t overuse the strength of his voice and, in the next piece Leis’ rudern hier, mein Gondolier, charmed the audience with seductive pianos that sounded equally beautifully to the previous fortes. Also the feeling of love in Schumann’s Widmung was expressed in a delightful and touching way. Later on, we listened to the colourful interpretation of Abschied (I’d never supposed one can sing ade! in so many ways), a cutely drunk Bacchus in Trinklied and hypnotic Der Doppelgänger whose finale was so amazing that even the most eager „clappers” were sitting paralysed as if afraid of moving. People were then amused by the humorous performance of The Foggy, Foggy Dew only to become pensive again while listening to Down the Salley Gardens. When the moment of singing My Little Welsh Home came, Terfel announced, both in English and Welsh, that he dedicated the next two pieces to the people on the balcony with a Welsh dragon. Finally, he charmed us with three Tosti’s songs presented with a great mastery of voice that had then a wonderful velvety sound.

Naturally, the concert ended with encores. This gave us the opportunity to enjoy the comical story about a meeting with a big brown bear as well as Don Giovanni’s canzonetta Deh vieni alla finestra. Terfel turned up to be a seductive but cynical Don Giovanni. To sing the serenade, he jumped off the stage with a rose taken out of the bouquet he’d just received. The piece was addressed to two chosen ladies: he strewed petals over one of them, knelt before the other and kissed both at the end.

Malcolm Martineau, who often accompanies Bryn Terfel, proved to be a great partner. The artists complemented each other and together made that evening memorable.

After the concert, both artists gave autographs to the crowd of enthusiastic admirers. This unforgettable concert made me hope that Bryn Terfel’s wish, expressed in his dedication for „Trubadur”, will come true. This would be a great joy for all the members of our club.